Packaged in 12 oz. cans, the drinks are a blend of 40 percent tea and 60 percent beer and contain less than 4 percent ABV. Owl’s Brew co-founder and CEO Jennie Ripps told BevNET that the beverages were inspired by the Radler beer style, which was popularized in the 1920s by cyclists who wanted a full-flavored, but low-alcohol option. 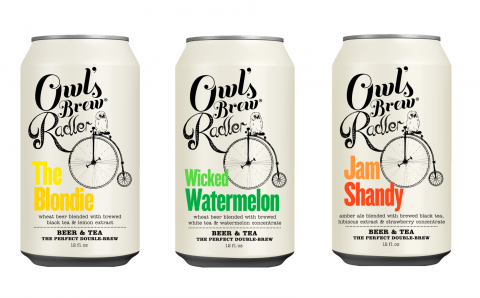 Ripps said that that since the inception of Owl’s Brew, she and company president Maria Littlefield wanted to develop a line of RTD cocktails. However, the concept of a beer-based product came to the forefront about a year ago. Although Owl’s Brew mixers are primarily designed for blending with spirits, the Radlers were developed based on what Ripps and Littlefield “were interested in and [their] own behavior.” She also noted an opportunity to reach some craft beer consumers, but with a product whose flavor profile and alcohol content allows for a variety of consumption occasions.

“There are a lot of fruit-infused or tea-infused beers on the market,” she continued. “But there’s nothing actually combining tea with beer to make something that tastes great, but that doesn’t taste like beer.”

The Radlers will be sold in 6-packs and priced at $11.99. The Blondie and Wicked Watermelon will launch in July, while Jam Shandy will make its debut in September. Distribution will begin in the Northeast, including New York, New Jersey, Connecticut, Rhode Island, and Massachusetts.

In support of the launch and rollout, Owl’s Brew has brought on former Anheuser-Busch executive John Nicholas, who will play a key role navigating the regulatory and legal landscape for distribution and sale of beer products across the U.S.